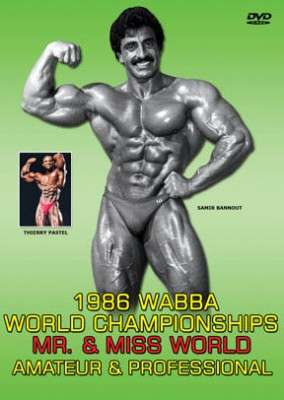 In the Amateur Class Men’s Overall posedown, it was the rugged muscularity, symmetry and hard condition of the Frenchman, Nordine Zouareg, that prevailed in the end.

For the Overall Women’s title, it was the battle of the Italians with the size, shape, class and style of Patricia Lo Coco being too much on the day for the elegant Anna Gileno. Future champion Sylvie Esmenjaud of France had to settle for 4th in her class.

In the Men’s Pro Class, it was a very close decision between old NABBA Universe rivals in Thierry Pastel – France and Pierro Venturato – Italy for the top award. Finally it was the rugged physique and massive arms of Thierry Pastel swaying the judges his way for first place.

The Pro Women’s class was won by the sensational Claudia Profanter of Italy, a future Ms. Olympia competitor. Claudia had the complete package of shape, style, condition, beauty and charisma.

The DVD starts with approximately 10 mins of Prejudging Highlights from the men’s and women’s amateur classes.

The evening Show starts with all national teams posing together on stage. This is followed by the Amateur Classes with posing by the top 6 in each class in reverse order from 6th place down to the class winner and presentation of awards.

Complete posing routine by the winner of the Men’s Best Poser Award – an unnamed guy from Japan who did not place top 6.

Women’s Amateur Miss World – Overall Posedown won by Patricia Lo Coco of Italy.
The main winners pose together for group photos. Some of the women’s posing costumes were the briefest we have ever seen!