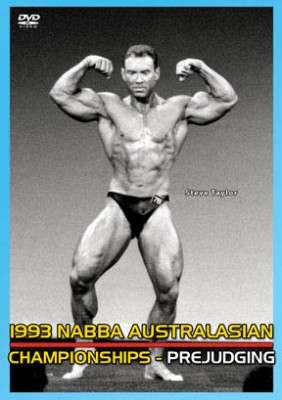 A total of 55 magnificent physiques took part – the best from all over Australia, spread throughout 8 classes, including: Teens, Juniors, Masters Over 40’s, Novice, the four Men’s Open Classes, Women’s Over 35, Women’s Figure and Women’s Physique.

Held on 12th September at the superb World Congress Centre in Melbourne, Victoria, this prestigious contest continues to draw Australia’s premier bodybuilding athletes year after year.  1993 was no exception.

A huge number of competitors crowded onto the stage to compete for the honour of representing Australia at the world’s most glamorous titles – the Mr. & Miss Universe contest held in England each October. They want to follow in the footsteps of the all time greats, such as Arnold, Frank Zane, Sergio Oliva, Bill Pearl and many many more.  Steve Taylor is pictured front cover above.

A total of 55 magnificent physiques took part – the best from all over Australia, spread throughout 8 classes, including: Teens, Juniors, Masters Over 40’s, Novice, the four Men’s Open Classes, Women’s Over 35, Women’s Figure and Women’s Physique.   And of course the all-important OVERALL MR. AUSTRALASIA title was won this year by JOHN DISTEFANO.

In this DVD you will see the COMPLETE PREJUDGING – MEN & WOMEN, for every class, where every bodybuilder is shown.

In the Teenage Class, RYAN CHINNER was a brilliant first time winner for the Northern Territory.   FRANK TOTH convincingly won the Junior (Under 21 years) class.  DON MAHONEY did it again in the Masters Over 40 class.  The Novice winner, CHRISTOPHE DHALLUIN from W.A., was carved out of granite – the hardest man in the contest. Sensational!

When it came to the Men’s Open Classes, two class titles went to South Australia in STEVE TAYLOR and MIKE BUDER with JOHN DISTEFANO winning the Short Class and overall title.   Timorese Asian RUI MU (from north of Darwin) was the surprise packet winning Class 3 with his elegant Zane like physique.  Truly a night to remember!