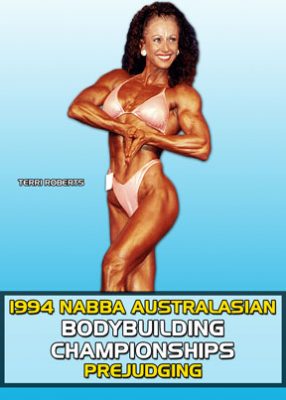 The Prejudging DVD shows the key comparisons and compulsories and a shortened version of each competitor’s posing routine.

The Prejudging DVD shows the key comparisons and compulsories and a shortened version of each competitor’s posing routine.

Held in Melbourne at Festival Hall on 25th September, 1994 –  just one week after the State championships, and including the inaugural FITNESS FIGURE divisions – this is the contest that leads to the NABBA Universe in England!  The sparks were flying in the battle to see who could achieve the ultimate goals – to win the titles of Mr. & Ms. Australasia, as well as gaining a place in the national team to compete in Birmingham.

The rivalry was intense, especially in the Women’s Physique, where the favourite to win – the World Physique Champion, LISA EGAN, was pipped at the post by newcomer ANDREA IZZARD from Mildura, Victoria.  The judges decision was totally vindicated on the stage in England, where Andrea not only won her height class, but also took out the overall physique championship.

In the figure class, three time second place getter MERISE MIRAGLIOTTA finally cracked it, and to her joy won the title against stiff opposition from South Australia and New South Wales.

The Men’s Open Classes sparkled particularly in the Short Class with the effervescent and controversial COLIN MURPHIE taking out the short class title.  What a routine!  In the Overall Posedown SHANE STRATTON (N.S.W.) was the convincing and brilliant winner. A week later he was also a class winner at the NABBA Universe.

All in all a magnificent contest.  The show DVD gives you the routines of all competitors in all classes, the Fitness Figure contest which is so hot the screen sizzles, and all the posedowns and presentations.