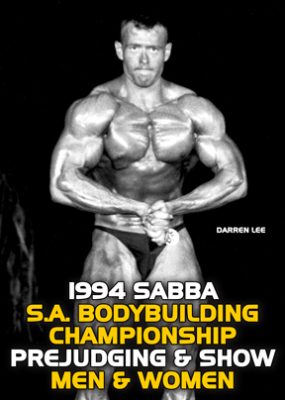 Special mention goes to the Overall winner DARREN LEE. He has come from nowhere to take it all – big legs, massive calves, great posing – Darren had the audience screaming for more.

Special mention goes to the Overall winner DARREN LEE. He has come from nowhere to take it all – big legs, massive calves, great posing – Darren had the audience screaming for more.  The other notable in the Men’s Division was another newcomer – Novice JASON FREEMANTLE.  He went on to win the Novice Section at the Australasian titles just one week later. A fantastic physique with a great future.

A surprise and most impressive entry was LISA EGAN, the Women’s World Physique Champion for 1994. She took out the Women’s Physique title, followed by TARA NORTH.  Tara’s performance is worthy of special mention. She won the prestigious JOHN KOZIURA MEMORIAL trophy for most potential, becoming the first ever female competitor to receive this important award.

Over the years, some incredible bodybuilders have won the South Australian state titles, with many going on to represent Australia overseas. John Koziura holds a record that is never likely to be broken with 10 Mr. South Australia titles. John was tragically killed in a road accident in late 1982.
His victories were in 1971, 1973, 1974, 1976 to 1982.

John always helped and encouraged young and up and coming bodybuilders. Accordingly the perpetual trophy awarded in his honour is for the bodybuilder, male or female, deemed to have the most potential.

In the Women’s Figure there was an amazingly tight battle before ANNA LEIGH took out the title from TERRI ROBERTS with HEATHER LINDSAY in 3rd place. Terri went on to win the 2001 NABBA Universe – Figure Class 2. Terri is still in amazing shape and competing in 2017.

The special guest act was the LATIN AMERICAN DUO.