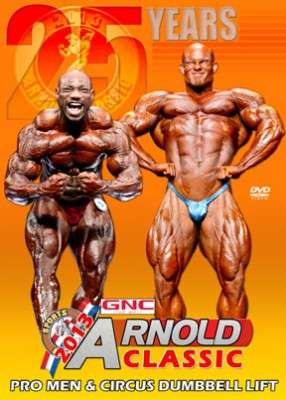 Ben Pakulski placed second in this his career-best Pro result, where he also took out the Most Muscular Trophy.
Toney Freeman from Atlanta, Georgia was 3rd, same as his previous best placing in 2007.
In 4th place it was Johnnie Jackson, 5th place went to Hidetada Yamagishi and rounding out the top six was Cedric McMillan.

See the ARNOLD CLASSIC PHOTO GALLERY.  Thanks to Jason Breeze for the great photos.

PREJUDGING
The DVD presents the COMPLETE PREJUDGING with all of the compulsory poses and callouts.

PRO STRONGMAN
The last part of the DVD includes the Final Event of the Pro Strongman, the Circus DB Lift. See this complete Circus Lift contest, along with the winner’s award by Arnold to Vytautas Lalas of Lithuania.

The 2013 Arnold Schwarzenegger Liftetime Achievement Award was presented to Rich Gaspari, winner of the inaugural Arnold Classic in 1989, and founder of the supplement company Gaspari Nutrition. Gaspari was inducted into the IFBB Hall of Fame in 2004. In addition to the 1989 Arnold Classic, Rich Gaspari also won the Mr. America and Mr. Universe amateur titles and the Professional Mr. World contest.

Celebrating 25 Years of the Arnold Classic.