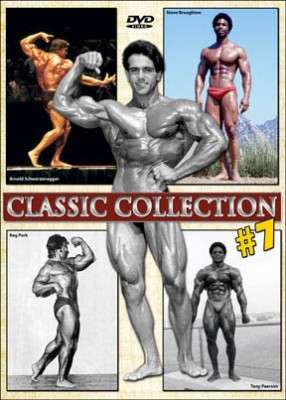 The Most Well Known Stars & Events in this DVD are seen in this order:

1977 Mr. Venice Beach contest, on 4th July, was won by Steve Broughton with Tony Pearson 2nd and Gordon Wong 3rd. The contest was held on a brilliant mid-summer’s day next to the famous Venice weight pen. Tony was sensational and at 20 years old, was the Jr. Mr. Los Angeles and Most Muscular winner at the 1977 Jr. Mr. USA. The film footage shows Steve Broughton being presented as the winner with a very narrow decision over Tony Pearson (pictured below). Tony won this contest in 1976.
1978 Mr. Surf Festival, held on Venice Beach, again hosted by Bill Howard with a much larger Tony Pearson in attendance. Gary Kubek was first, Paul Carmody 2nd and Brian Antonovich 3rd.

1980 Mr. Surf Festival at Venice Beach on Labour Day, September 1st. It was won by a very symmetrical and ripped Jim Tarleton. Not sure of the other placings.

1980  Best in Australia Contest held at the Sydney Opera House as the support contest at the 1980 Mr. Olympia. It was won by an outstanding young John Terilli with Graeme Lancefield 2nd and John Koziura 3rd. John went on to become a Mr. Universe and then a top IFBB Pro.

1980 Olympia show, final segments. Bev Francis squatting (up to 315 lbs x 5 reps) and then posing. This was just before she went to USA to start shooting for Pumping Iron II – The Women. Reg Park guest posing at age 52 and looking amazing, and finally duo posing by many times Mr. Australia Billy Knight and Carole Graham.

Some background music has been added.

My thanks for this detailed content listing/running order to our researcher Dr. David New with help from John Corlett. The overall DVD quality is very good to absolutely excellent.