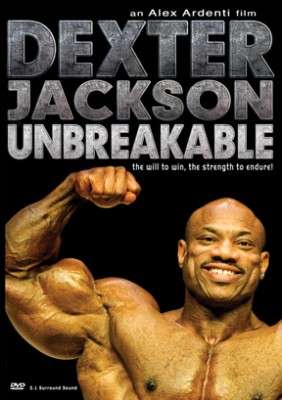 Dexter “The Blade” Jackson shows you what it means to be one of the greatest professional bodybuilders of all time as you follow him step by step through his brutal workouts in Florida preceding the 2009 Mr Olympia and in Gold’s Gym Venice, California, where he fine tunes his amazing peak condition.

Over 260 minutes of explosive workouts dynamically intercut with highly informative ‘one on one’ interviews on Dexter’s career highlights, training philosophy, nutritional planning and handling his ever growing popularity. Mr Olympia opens up like never before about how he began he began weight training just to pack on a few pounds of muscle… and ended up being a dominating force on the bodybuilding scene!

The SUPERSTAR SEMINAR chapter is one of the greatest special features included in any bodybuilding DVD… ever! A separate 2 hr 20 minute segment with Ronnie Coleman, Phil Heath, Troy Alves, Joe McNeil and Dexter himself going at it with each other and answering the crowd’s numerous questions. Filmed during the 2009 Dexter Jackson Classic this separate footage has wall to wall information and discussions on everything concerning bodybuilding with hilarious moments throughout! Jay Cutler joins the pro team for a ‘mano a mano’ posedown at the evening show.

An interesting fact is that Dexter started out his career as a Bantamweight competitor and is the only Olympian to have gained over 100 pounds of muscle to win the Mr. Olympia title.

The SUPERSTAR SEMINAR alone is well worth the price of this DVD!

Dexter Jackson: Unbreakable delivers the most inspirational footage of The Blade ever filmed accompanied by a compelling original soundtrack. Filmed in Hi Def and mixed with Hollywood 5.1. Surround Sound this instant DVD classic will be a driving force for your next workout… and the next! Play it loud and get motivated!