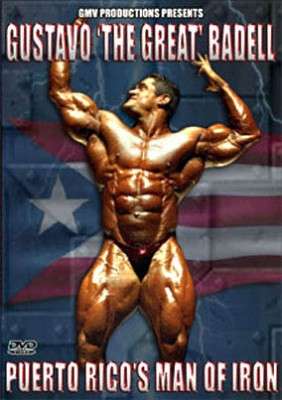 Showcasing the remarkable journey from near obscurity at the 2002 Olympia to IRON MAN Champion of 2005.

Showcasing the remarkable journey from near obscurity at the 2002 Olympia to IRON MAN Champion of 2005.

One of the fastest rising new Pros is GUSTAVO BADELL from Puerto Rico.
At the 2004 Mr Olympia he placed 3rd and then several months later he celebrated his first Pro victory, winning the 2005 Iron Man Pro.  He truly is a ‘Man of Iron’ with his hardcore physique.

This DVD profiles his career to date from the first time we taped him in 1999 at the English G.P. Further contest highlights & pump room footage are included from 2001 through to 2005. Plus weigh in and interview.

A very special highlight is Gustavo’s pumping and posing poolside in Las Vegas on the day after the 2004 Mr Olympia.

He is Huge and Shredded – Simply Unbelievable!