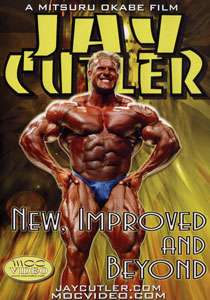 The one you have all been waiting for – the brand new Jay Cutler DVD.  It’s actually a massive 2 DVD set, and the total running time is a whopping 4 hours and 37 minutes.

And then there are the interviews.  At the end of it all, you really feel you know Jay cutler the world famous bodybuilder, as well as Jay Cutler the man.