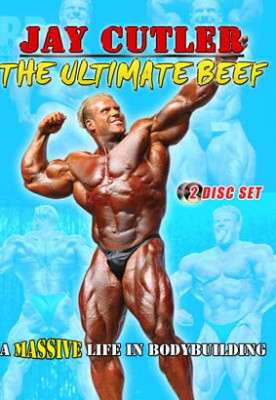 This mega DVD set of 7 hours traces the career of Jay Cutler from his teenage years through to his 2009 Mr. Olympia victory. At the time of release, Jay Cutler was a 3 time Mr. Olympia winner and a 3 time winner of the Arnold Classic. He won his 4th Mr. Olympia in 2010.

Much of this footage has never been seen before. This is GMV’s personal tribute to one of the greatest and most popular bodybuilders of all time.
This massive 2 disc set also includes a huge PHOTO GALLERY. It has been 17 years in the making, shooting and gathering of material, and 4 months of editing.

The DVD concludes with a complete contest history of Jay’s career to date of release.

Disc #1:
Learn some of Jay’s “secrets” in this informative and in-depth seminar footage shot with one of the world’s greatest champions.
3 intense seminars packed with info leading up to Jay’s first Olympia victory in 2006 and more during his years of greatest success.
Hear about his training routines, weights and exercises used, what he eats, drinks, contest preparation and much more. No question is dodged. You will see the growth of Jay as a superstar during these seminars over a 4 year period. Includes some informal posing.