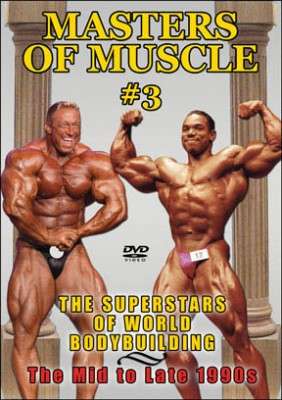 Mid to Late 1990s – The Best Men from FIBO.
See this huge array of amazing stars of world bodybuilding from the mid to late ’90s in various guest posing routines.

This DVD is #3 out of 4 in our Legends series on THE SUPERSTARS OF WORLD BODYBUILDING, from the early to mid 80s in #1, and running up to the present time in the final edition, #4.

See this huge array of amazing stars of world bodybuilding from the mid to late ’90s in various guest posing routines. These champion men of muscle are the very best of the best from the Golden Years of bodybuilding. Again our biggest dilemma was “who to put on the front cover” in that we have too many champions for one DVD!! Finally it was front cover left to right: Markus Ruhl and Flex Wheeler.  FLEX WHEELER PHOTO GALLERY.

EXTRA PHOTOS in the PHOTO GALLERY #3 FOR THIS DVD.

THE STARS:
Here is the list of champions seen in #3 with a number of them being Mr. Olympia or Mr. Universe winners and top competitors – listed in the approximate order seen in the DVD. Also includes some group posedowns and brief interviews: