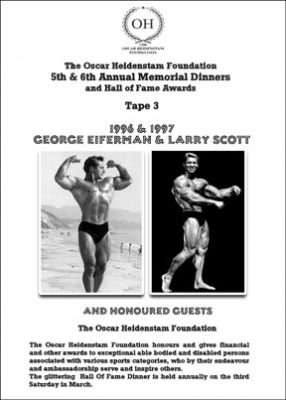 The glittering OHF Hall Of Fame Dinner was held annually in London on the third Saturday in March, from 1992 to 2008. The main organiser was Malcolm Whyatt.

On March 22nd, 1997 LARRY SCOTT from USA and the first ever Mr. Olympia was the main guest of honour. Other special guests were MARVIN EDER from USA, DAVE PROWSE and BILL RICHARDSON.

The Oscar Heidenstam Foundation honours and gives recognition to Legends of the Sport, awards for Posing Artistry, and financial and other awards to exceptional able bodied and disabled persons associated with various sports categories, who by their endeavour and ambassadorship serve and inspire others.

See the world-famous honourees, distinguished guests and the many other personalities. Enjoy the speeches, the tears and laughter, the presentation of awards, interviews, memorabilia, impromptu entertainment and those unforgettable agility and strength feats.