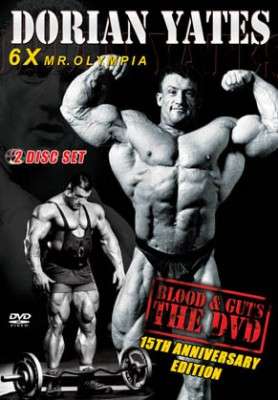 We present all of the life time footage that we could find featuring the fabulous career of 6 time Mr Olympia, DORIAN YATES.  The contest footage covers his career from his first British victory in 1986, his Olympia appearances, many of his Grand Prix victories, guest posing and more.

This is the 15th ANNIVERSARY EDITION of the original ULTIMATE VERSION of DORIAN YATES BLOOD & GUTS DVD. The updated 2 DVD set.

*In Celebration of this updated version of the 15th Anniversary Edition of this DVD – May 2011
We have added an extra 4 minutes to the total running time with 2 new scenes, and updated the PHOTO GALLERY & BIO with some new material. We also updated the DVD cover as well!

When we created THE ULTIMATE EDITION in 2008, we added around two and a half hours of NEW MATERIAL to present all of the life time footage that we could find featuring the fabulous career of 6 time Mr Olympia, DORIAN YATES. This constitutes Disc #2. Much of this was shot by Wayne of GMV Productions during Dorian’s career and includes our last interview with him in 2002 at the Olympia Expo.

The contest footage covers his career from his first British victory in 1986, to his Olympia appearances (thanks to the generosity of Andy Olson of Magna Media) to many of his Grand Prix victories to guest posing and more.

Not to be missed are the 25 minutes of wonderful, interesting and funny  out- takes, thanks to Mark Dugdale and cameraman Joel Barham, from their shooting with Dorian at the Temple Gym in Birmingham. This footage was shot whilst filming Mark’s latest DVD “A Week in the Dungeon”, available from Mark Dugdale as well as from GMV.

After we scoured our video archive for most this new material we then went back through our photo files from all the contests that we or our photographers have covered during Dorian’s career. This has turned up a number of fabulous, previously unseen photos which have been scanned and added to the huge PHOTO GALLERY.

It now contains around 150 photos covering every aspect of Dorian’s career from training in the gym to the stage to private and informal shots. Our thanks to Dorian, Lee Dickens and all who contributed photos. We hope that you will enjoy what is now the Ultimate Edition of the Ultimate video record of the career of the Ultimate Mr Olympia – DORIAN YATES.

* This contains the original 64 minutes, BLOOD & GUTS DVD. Witness the intensity and determination as we follow the near 300lb multi Mr. Olympia winner DORIAN YATES through a genuine ‘no holds barred’ hardcore workout. See the weights used and feel the supreme effort that has moulded Dorian Yates into the world’s most massive bodybuilder.

* 25 minutes of DUGDALE OUT-TAKES where you see informal footage of Dorian at the gym, hear him coaching Mark, hear his comments on others in the industry, see Dorian coaching the massive ZACK KHAN  (a top British amateur at the time who now has his Pro Card). You also see Kevin Horton who shot the original gym workout explaining why most of it was presented in B&W. Plus much more.

* Approximately 150 photos in the DVD PHOTO GALLERY. Many have never been seen before.

This contains all the archival footage available on Dorian, including his 6 Mr. Olympia crowns and a wonderful collection of previously unseen footage.  Apart from the Olympia highlights, the other footage was primarily shot by GMV’s Wayne Gallasch and is from his personal archive.  FIBO footage is in conjunction with Willy Zdenek of Sport Video Hits, Germany.

Born in Hurley, Staffordshire, near Birmingham, England, Dorian Yates commenced working out in 1983. The man dubbed “The Shadow” (by FLEX Editor-in-Chief Peter McGough) shone a new light of awareness onto training methods with his brief but very high-intensity workouts.

After some important victories in England – 1985 Novice Championships and 1986 and 1988 British Championships – Yates visited New York for the 1990 Night of Champions and, in his pro debut, he took second place to Mohamed Benaziza.   He vowed that next year he would return to win this contest. He did!

In 1991, Yates was the runner-up at the Olympia to Lee Haney, who won his eighth record-setting Olympia and then retired.  From 1992 through 1997, Yates dominated the sport’s highest title with 6 Sandows in a row.  In 1994, he overcame a torn biceps to win the crown. In 1997, his most valiant victory came when he tore a triceps three weeks prior to the contest, but still battled on to victory.

Due to the injury, Yates was forced to retire at the peak of his career, with a pro record of 15 wins and two second-place finishes. Being a six-time Mr Olympia should say it all, especially when you consider the freakiness with which he redefined all the parameters of bodybuilding. He is truly a legend of the sport and to many people, the greatest bodybuilder of all time!

Dorian ran the famous Temple Gym in Birmingham and now has his own line of supplements – DY.

In a pro career encompassing 17 contests, Dorian Yates scored 15 victories and 2-second places, giving him an 88% winning percentage. This is the highest percentage of any IFBB Pro.