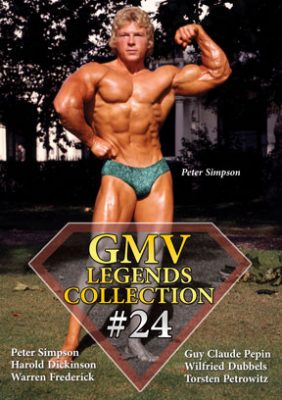 From deep in the archives: A brand new release – never seen before.

Here are some more outstanding bodybuilding stars and champions from the seventies and eighties. Mostly shot in England right after the NABBA Universe competitions, with Torsten filmed near Heidelberg, Germany.

Peter Simpson is a Mr Europe winner and runner-up 1975 Mr Britain, and has also placed highly at the NABBA Universe. Similarly with Harold Dickinson, another outstanding English bodybuilder of this period.

Warren Frederick has won major titles such as Pro Mr America and World Cup Pro Universe, and has competed with great success at the NABBA Universe with seconds in 1972 and 1973.

Our two Germans are as follows. Wilfried Dubbels features in another GMV release, documenting his career and training. He is still in great shape today, and the author of a number of books.

Torsten Petrowitz was an up and coming junior star when I filmed him in an event near Heidelberg in 1981.