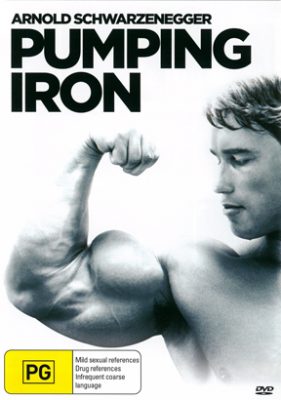 One of the most famous bodybuilding movies of all time – starring the legendary Arnold Schwarzenegger. This is the 25th Anniversary edition of the original production.

This is the most famous bodybuilding DVD ever produced! It is the definitive DVD on the sport of bodybuilding and has been seen by more bodybuilding fans than any other DVD on our great sport. This film also introduced Arnold to a wider world audience, and also put him on the map to go on to a huge and very successful career in the movies.

Pumping Iron the movie is a 1977 production highlighting the world of bodybuilding, and in particular focusing on the 1975 IFBB Olympia and Mr. Universe contests in South Africa. Most of the film focuses on the intense rivalry and competition between Arnold Schwarzenegger and Lou Ferrigno. The production also features some segments on other bodybuilders such as Franco Columbu, Ken Waller, Mike Katz, Ed Corney, Serge Nubret, Robby Robinson, Paul Grant and other top men of that time.

The bonus material exclusive to this 25th Anniversary edition features more than 84 minutes of new, never-before-released programming, including:

AND OF COURSE – PUMPING IRON itself – digitally re-mastered.