Today being Bastille Day in France, 14th July, it seemed perfect timing for this long overdue edition of my Hard News. I have recently returned from France where the 2015 WFF Universe was staged by Olivier Ripert in his home city of La Ciotat on the western end of the French Riviera, near Marseille. Calum von Moger was named Pro Mr Universe for a third time. (He was Junior Mr Universe in 2011 and won the 2014 WFF Amateur Mr Universe last year in South Korea.)

Calum has been training since the age of 15 and is now aged 25. He hails from Geelong in Victoria. Due to his Austrian and Dutch heritage, he is known in some circles as Arnold #2, and when he speaks with his slight Austrian accent, he even sounds like the young Arnold! It is a great honour for Calum to be compared to Arnold Schwarzenegger, generally regarded by many as the greatest bodybuilder of all time.

Calum then went on to Italy from France and a week later won the Pro title at the 2015 WFF European Championships. He is really on a roll right now and seems unbeatable! In France the 1.9 m tall Calum competed at a weight of around 109 kilos. With his height he towered over his opposition. What makes Calum a great champion is not just his size, but also his superb symmetry, wonderful shape, and attention to detail along with his great condition.

A unique characteristic with Calum is the split peak in his biceps, see photo below. No exercise can develop this special peak, it is initially down to genetics, plus of course lots of hard work to develop such great arms. 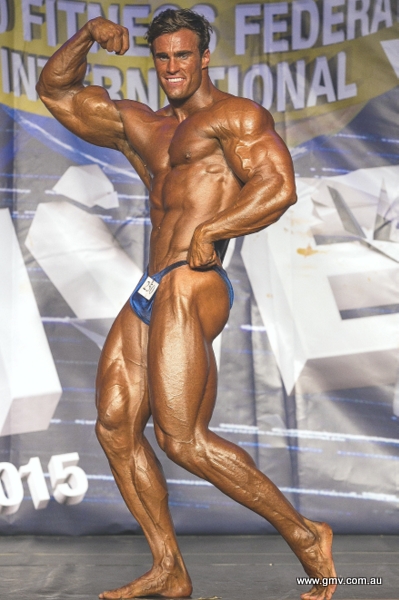 Calum follows a traditional high protein low carb diet and likes to eat every few hours. Along with his weights 6 days a week, he also puts great emphasis on his daily cardio training and lots of posing practice. I have no doubt that Calum is headed for a very successful full-time career as a professional bodybuilder and spokesperson for the sport, and for the WFF and NABBA.

It was a privilege to be the DVD producer for this WFF Universe contest in France, and we will have the various DVDs edited and available as soon as possible. It will be no easy task as the contest ran for 12 hours and featured 250 of the best WFF athletes from around the world. The WFF Universe event DVDs is available in regular DVD and also on Blu-ray.

We have decided to make available as a sneak preview of Calum on HD Download – his complete Pro Men’s Bodybuilding Class competition, from the start of the Pro Prejudging through to Calum’s victory including his posing on stage afterwards for still photos with various important people. You get to see every second that Calum was on stage, shot in crystal clear full HD 1920 x 1080. The approximate running time is 25 mins.

Here is a link to my CALUM von MOGER PHOTO GALLERY.
It is a combination of contest photos from France shot by Francesco Casillo www.frankcasillo.com and myself. Plus some great training photos that Calum has shared with his FB fans. calumvonmoger.com and facebook.com/calumvonmogerbodybuilder