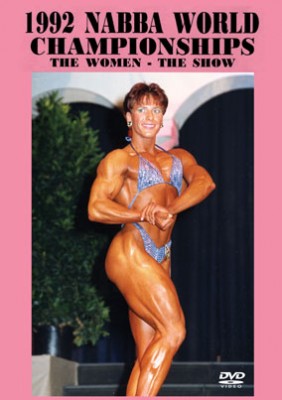 The Women’s event was of exceptional standard with 2 classes each for Figure and Physique. It was the best women’s line-up seen in years. This video also includes the PAIRS.  This contest was shot for GMV and unfortunately the prejudging was not recorded.

Held in Wetzlar, Germany on June 20th, 1992, the Women’s event was of exceptional standard with 2 classes each for Figure and Physique. It was the best women’s line-up seen in years. This DVD also includes the PAIRS.
This contest was shot for GMV and unfortunately the prejudging was not recorded.

In each class, the women line up on stage, the top 6 are called out and the remaining unplaced competitors then pose down together for 30 to 45 seconds. Then the top 6 come on stage and do their individual posing routines. You also see all Class Awards.

In the TALL FIGURE CLASS, Australia’s own champion, the glamorous SAMI RENOUF was hot on the heels of the eventual overall Figure winner – the beautiful and shapely SARYN MULDROW. Saryn had a most innovative and entertaining routine to show off her long, long perfectly sculptured legs and gorgeous figure at its very best. Saryn is pictured rear cover above.

In the OVERALL POSEDOWN, it was a very strong showing from SARYN MULDROW that saw her take a well earned victory over MONICA CAPONETTO. Saryn later went on to win  the 1996 Fitness Olympia title.

The 2 physique classes boasted their strongest ever lineups. A battle royal took place in the PHYSIQUE SHORT CLASS 2 between ANDREA KLAESKE of Germany, and Australia’s DEBORAH COMPTON. Deborah had the best back and triceps in the whole contest and improved as the day went on. Andrea was the most ripped competitor with excellent overall balance and symmetry. Andrea is an Ellen van Maris look-alike and got the nod from the judges over Deborah for the title, in a very close finish.

In the Tall PHYSIQUE CLASS 1, it was a very close fought  thing with victory  to SYLVIA HOEFLER, pictured front cover, by one point over Italy’s CINZIA CAMPEIS. Sylvia was quite a star in that she won the IFBB World Junior Heavyweight title in 1989, then took a break from competition before switching to the NABBA ranks earlier in the year. Sylvia had the biggest and best shaped legs seen in a long time, and the separation in her thighs was unbelievable! Topped off by awesome delts and arms, and a very broad back, the strikingly lovely and feminine Sylvia grabbed the class title from the equally outstanding CINZIA CAMPEIS.

Cinzia was also runner up in the 1991 NABBA Universe Tall Class 1. Her super ripped physique is destined for well deserved top honours in the very near future.

There were 4 excellent couples entered in the mixed Pairs competition. The winners were Ute Geisel and George Uhlich from Germany. Ute was the 1991 NABBA Miss Universe Physique Class champion.

In the OVERALL POSEDOWN for the title of Women’s World Physique Champion, it was the 21 year old German prodigy SYLVIA HOEFLER from the Tall Class who prevailed over short class winner ANDREA KLAESKE in an all German affair. If ever Germany had a potential winner for the title of Ms. Olympia, then one need look no further than Sylvia! This is an outstanding 90 mins DVD which is the only record of the women from this contest. The Prejudging was not recorded.