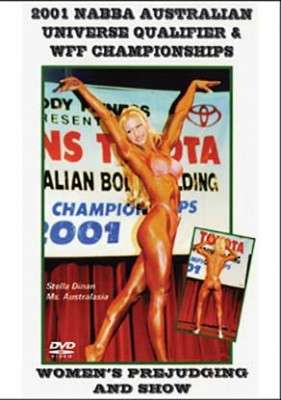 A fairy tale come true for South Australian Figure competitor STELLA DINAN – she took out the overall figure to become Ms Australasia Figure Champion for 2001! This year held in sunny Sydney, the Australasian championships were a smorgasbord of trophies for South Australia – their biggest haul ever!!

This contest is a qualifying event for the NABBA Universe, held in England each year.

It was a fairy tale come true for South Australian Figure competitor STELLA DINAN.   Stella won the Overall Figure title to become Ms Australasia Figure Champion for 2001! The contest for this year was held in Sydney, and the South Australian team won their biggest haul of trophies ever.

This video brings you the complete women’s event from Prejudging through to the awards at The Show.