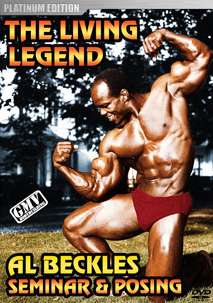 Highlights of a seminar, during which Al answers questions. Beckles treats the audience to posing – and at the age of 55 years he was in superb condition.

This DVD shows 35 minutes of highlights of a seminar given in Adelaide, South Australia, during which Albert answers questions on exercise, contest preparation, diet, supplements and training. Beckles treats the audience to 5 minutes of posing – and at the age of 55 years he was in superb condition.

The seminar was taped just a few days after he competed in the 1985 Mr. Olympia, where he achieved his all time high of second place to Lee Haney.

The scene then moves forward four years to the 1989 FIBO Bodybuilding Expo held in Cologne, Germany, where Al is interviewed together with fellow professionals, PHIL HILL and then RON LOVE. They talk about Al’s career, and some of its highlights. Phil points out that Beckles has been competing for an incredible 30 years in the sport of bodybuilding and that’s one of the reasons he is a legend in his own right.

Finally SAMIR BANNOUT poses for the excited FIBO audience, and Al joins him for an informal extended posing sequence. As both men were competing on the European Grand Prix circuit at the time, they were both ripped and in awesome shape. Samir was the 1983 Mr. Olympia winner.

Not to be missed are the close-ups on Al’s genetic gift of the best split-peak biceps in the business. Cover photos by Wayne Gallasch, copyright Wayne & GMV Productions.

Review of this DVD.

ALBERT BECKLES –  a remarkable competitor in more than 100 contests throughout his career.

In 1971 he won the NABBA Britain again, and the AAU Mr. World. Then won his Medium Height Class in the NABBA Universe and joined the IFBB. He next won the Overall IFBB Mr Universe in Paris a week after the NABBA Universe.  In 1973 he was Overall Mr. Europe before going on to a fantastic IFBB Pro career.

In 1991 he won the Niagara Falls Pro Invitational for his last pro victory.  Albert competed in the Mr. Olympia 13 times where he placed among the top five 6 times.  In 1985 he came in second to 8 times Mr. Olympia, Lee Haney. This was Al’s best ever Olympia placing.

Albert can lay claim to being one of the most active participants in bodybuilding history, having competed in over 100 contests including his amateur career.