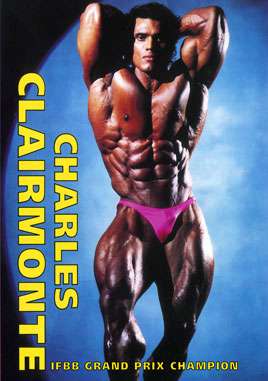 Born in Barbados and living in England, Charles has won virtually every contest he has entered. From competing in the Mr. Britain to 4 times NABBA Mr. Universe, Mr. Pro World, to 4 IFBB Grand Prix victories. This DVD brings you Charles’ display gym workout, and tips on training, together with posing and contest highlights of his career from 1986 to the present day. In this workout, Charlie demonstrates many of his favourite exercises. It is not a complete hardcore gym workout and is the only known training footage of Clairmonte.

Charles Clairmonte is without doubt one of UK’s greatest physique champions of all time. His record is truly amazing. After competing in the 1985 Mr. Britain he won the ’86 NABBA Amateur Universe, then the Pro Universe three years in a row from 1988 to 1990, followed by the ’90 NABBA Pro World title in Australia. Then Charles had great success against top ranking IFBB Professionals placing high at the ’93 and ’94 Mr. Olympias and winning FOUR first places in the 1993 IFBB European Grand Prix circuit. The most prestigious of these was the English GP, where he beat Flex Wheeler who only two weeks before was placed second in the Mr. Olympia.

Its character and style that sets Charles apart. He presents a complete package and not just a mass of raw muscle. We salute a great champion!!

His back is huge, rugged and V-shaped, his pecs striated and ripped, and delts like huge coconuts, showcasing his massive, peaked biceps. He has colossal thighs that defy description and abs and calves most bodybuilders would kill for!