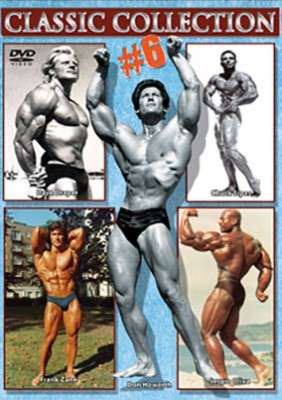 Presenting the physique stars of the ’60s and ’70s in this massive extravaganza of old time classic bodybuilders.  Includes Casey Viator, Chuck Sipes, Mike katz and many more.

See all new material in this Classic Collection Edition #6

Presenting the physique stars of the ‘60s and ‘70s in this massive extravaganza of old time classic bodybuilders.  From our film archives, we have an even greater number of stars from our precious 16mm and 8mm films.  Parts of this DVD are in black and white, with colour for those parts filmed after approximately 1970. The period covered in this DVD is the mid 60s to around 1977.  Music has been added.

Well Known Stars in this DVD include:

Here is a detailed content listing/running order thanks to our researcher Dr. David New.

The quality varies from mostly good to very good, to excellent depending on the stage lighting or age of the film.