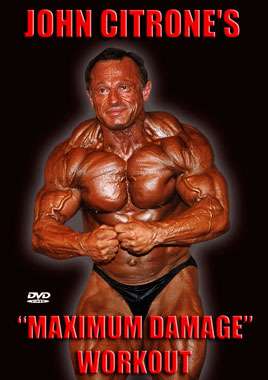 John Citrone, multi Mr. Universe and Mr. World winner is probably England’s most titled bodybuilder. In a career spanning more than 48 years John has battled with many of the greats of bodybuilding including Arnold Schwarzenegger back in the 60s!

John Citrone, multi Mr. Universe and Mr. World winner is England’s most titled bodybuilder. He won every contest available to him from Junior Mr. Britain to Mr Universe through to his recent Masters Mr. World title in 2005.

In a career which spanned more than 48 years John battled with many bodybuilding legends including Arnold Schwarzenegger in the 60s!

In John’s workout he takes each exercise to absolute failure giving new meaning to the phrase ‘maximum damage”.  All major body-parts are covered as John gives a running commentary of training tips, sets and reps after each exercise. There’s no faking the sweat or effort in this video! John is actually working out in his own gym.  What you see is what he does every day of the week – Maximum Damage training!

This is a highly motivational and instructional DVD from England’s most popular bodybuilder.

Enjoy a revealing interview and extensive posing at contests and in the studio with extreme closeups of John’s incredible muscularity!  Highlights of John’s strength act from the early ‘70’s are also shown. (He is also a former powerlifting champion.)

Other contest victories covered include the 2002 NABBA Worlds, 2004 NABBA Universe, 2005 NABBA Europeans and 2005 NABBA Worlds in Brazil. The highlights from Brazil include poolside posing and brief interview plus posing with other members of the British team.

The workout and posing was taped just prior to one of John’s magnificent victories at the World Championships.