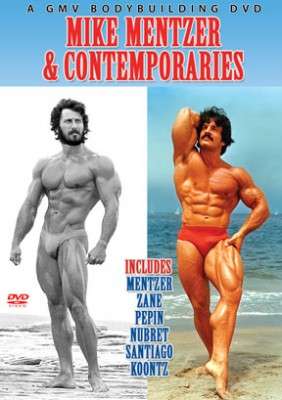 All of the bodybuilders in this DVD either competed against Mike, such as FRANK ZANE, or competed at the same time as Mike did, in the mid to late 70s. Mike and Frank Zane both competed in the 1979 and 1980 Mr Olympias.

This extremely popular video was originally titled MIKE MENTZER and FRIENDS. It has been more appropriately re-titled as MIKE MENTZER and CONTEMPORARIES in that all of the bodybuilders in this video either competed against Mike or  at the same time as Mike did, in the mid to late 70s. In fact Mike and Frank Zane both competed in the 1979 and 1980 Mr Olympias.

In the first segment see 14 minutes of a 25 year old MIKE MENTZER. He’s in the gym, performing curls, press behind neck, and other shoulder exercises, using HEAVY dumbells and Nautilus equipment. He poses those famous arms and back before heading into the studio for more oiling, pumping and posing. Mike is in top shape.

Frank Zane gives a classic posing performance in the next section, filmed in August 1975 by Robert Nailon at Coogee Beach, Sydney, Australia, after Zane guest posed at the Mr. South Pacific contest.  This rare footage shows the only time Frank Zane had a beard.  Zane was in fantastic condition with wide shoulders and a narrow waist.  Not to be missed is his famous “vacuum pose” and much more.  (We are sorry to say that they do not make bodybuilders like Frank these days!)

The Zane segment runs 11 minutes and finishes with studio posing.  Indoors against a dark background he seems thicker and fuller as he shows us all his classic and trademark poses.  We owe a great debt of gratitude to Robert Nailon for capturing this rare moment of time in Zane’s brilliant career. Frank was Mr Olympia in the years 1977 to 1979 inclusive. Robert’s photos of Zane are on the DVD cover and also below. All other photos were taken by Wayne Gallasch.

Guy-Claude Pepin was a little-known French bodybuilding star from Guadeloupe, French West Indies. Little known in USA that is, as he was a major star in Europe. He is brilliantly showcased in his segment lasting seven minutes.  This was filmed in London by Wayne in 1975, at a time when Pepin was living in Paris.  He later placed eighth in the 1979 IFBB World Championships heavyweight class which was won by Jusup Wilcosz.
Pepin’s segment in red posing trunks includes lots of arm poses.  Includes pumping with a chest expander used to do curls from the floor, and concluding with various unusual poses not normally seen on stage.

Serge Nubret is seen next.  He was with out doubt at his peak in this six-minute sequence.  It was filmed in Australia in the mid-70s.  Nubret’s heavy pecs and huge shoulders and arms are on display as he combines the best of both size and shape.  His flexing is deliberate and dramatic as he hits pose after pose for our camera.  The close-ups are awesome and Serge is among the best physiques and best posers of his time if not all time.
In 1975 he was runner up to Arnold in the Mr Olympia and has won Mr Universe and every other title known to man!

Ernie Santiago  is next shown in his 11 minute segment shot in a Californian studio session on the day after one of his contest successes in LA. Santiago oils and pumps to the max before posing.  He highlights his  tight chest and rock hard abs.  Using a large crusher grip, he really gets his pump going, veins bulging.

Ernie’s large biceps tattoo is prominent through out and is particularly evident during his considerable amount of arm posing he does for the camera – from every possible angle.  The action soon shifts to dumbbell presses for a further pump and pose segment.  See Ernie Santiago in his top contest winning condition.

Rod Koontz was one of the best known and most popular bodybuilders of the seventies.  He is shown next with a seven-minute studio segment. It starts with towel pulling with a smaller guy who then holds his wrists as Koontz pumps against him and then Koontz is pumping alone with a crusher grip.
Rod Koontz was noted for his heavy shoulders, tiny waist and trade mark moustache.  He gave the camera a very strong display of arm posing as he leans forward and pumps them for us. This is a rare segment as there is not much footage available showing the great Koontz physique.

Two short sequences end this DVD with  impact.  The first is two minutes of the 1969 Mr. Olympia.  The film is dark but priceless in its content. You can also see Franco Columbu standing next to the top two for the awards.
Under the end credits you will see  two minutes of Mike Mentzer guest posing in Adelaide, Australia,  in April 1980.  This short segment is also used in Mike’s 3rd DVD called “The Final Chapter”.  It is a classic moment with a  legend of bodybuilding probably in his last guest posing appearance.

Note: All segmments were shot on film, digitally transferred to video and authored to DVD with background music added.