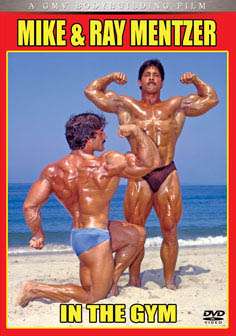 The awesome Mentzer brothers, fueled by their intense rivalry, show what they can do when they pump iron at the gym.

MIKE & RAY MENTZER – IN THE GYM

Filmed in the gym late at night, they blast their way through their display workout routines with heavy weights which are a little less than they would normally use. However this is the only known footage of them training together.

Mike and Ray each go through their most incredible workouts, muscles dripping with sweat – the intensity, muscle display and sheer power will shock you!

Obviously every single set could not be recorded on film the way it could be recorded today if shot on video – with full live sound! There is no live sound in the gym and we have a music background added.

After Mike flexes and poses each muscle group, hard and pumped, they head for Venice Beach. Ray Mentzer oils, pumps and poses in a fantastic solo presentation, for the final 15 minutes of the DVD.

As mentioned above, this original video V-121 was shot on silent super 8 film back in July 1978 while Mike and Ray were working out in the gym. It was not just a staged pump-up. At that time no one deemed them worthy of a full professional 16mm film production complete with sound and a big budget in order to do it the way some videos are shot today. Back then I had the foresight and luck to get the 2 guys into the gym and record as much as I could afford to do with the technology available at the time. This was about 4 years before home video cameras came onto the world market.

Due to the high cost of film and developing in the seventies, it was not possible to shoot lots and lots of reels of film, recording more sets with each one getting heavier, or more exercises. But this rare documentary is the only known footage showing Mike and Ray actually working out.

Mike did record a TRAINING SEMINAR that was sold on cassette tape. Mike’s seminar was later licensed to GMV from Muscle Media 2000 to be used as part of the soundtrack of this video, now on DVD. This is an extremely rare and valuable DVD as we have no other recording of Mike’s voice.

If only we had the technology available then to shoot something like the Dorian Yates or Ronnie Coleman DVDs of today. It is also worth mentioning that not a single complete workout film was shot with Arnold Schwarzenegger or Frank Zane back in their competition days!  Workout films as we know them today were almost never shot in the 70s and early 80s.

The DVD includes a PHOTO GALLERY of many of Wayne’s unpublished photos of Mike & Ray in the Gym.

See Ray’s complete contest record at the bottom of page.

A review of the DVD Mike Mentzer at the Beach & Muscle Rocks.
Wayne’s tribute to Mike and Ray. Mike and Wayne were close friends. See Mike’s personal comments to Wayne below, showing front and rear covers of the booklet in which he wrote this tribute!