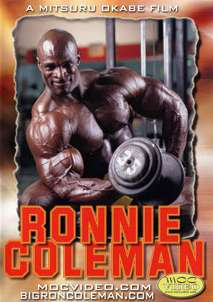 This was the first ever Ronnie training video. Now available on DVD and Download. Here is the most muscular police officer since Sergio!! This DVD shows Ronnie Coleman’s whole hardcore workout. You can also find out all about his lifestyle, see Ronnie winning contests, and much much more.

*** This was the first Ronnie Coleman video. Now available on DVD & Download.

This is Ronnie’s first ever training DVD and an iconic video in the series of DVDs made throughout his career. Although Ronnie is not as huge as he became later in his career, he was in incredible ripped condition. Many would say that he was near his all time best look and condition that he ever presented. This DVD runs through his typical training with the weights and exercises that he has pretty much used throughout his career.

The video includes Ronnie’s basic nutrition program, showing you a slice of his life near the start of his pro career. Although the running time is only 60 minutes, it includes a full routine for Ronnie and also shares some information on his nutrition with Ronnie providing some good information in his commentary. This is an all-time classic presentation on the champion who was to become the 8-time Mr Olympia record holder.

PHOTO GALLERY OF RONNIE IN THE GYM.

LIST OF ALL DVDs IN WHICH RONNIE COLEMAN IS MENTIONED.